Press freedom in Turkey: The case of Mohammed Rasool 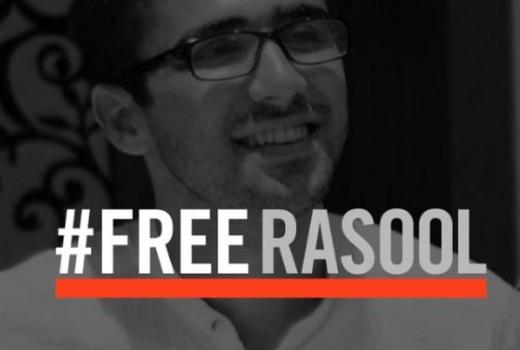 Press freedom in Turkey: The case of Mohammed Rasool

Instead of celebrating my friend and colleague Mohammed Ismael Rasool’s birthday, I am writing this piece about him right now. He just ‘celebrated’ his 25th birthday in a high security Turkish prison away from his loved ones. He could have been here with me in Sweden doing his master’s at Middle Eastern Studies. But no, Turkish state has a special ability to find the best free-thinkers around and putting them into prison as a part of thought-grinding process.

What is a 25 year-old very talented journalist with a double major doing at the same prison with ISIL militants screaming ‘Allāhu Akbar’ out of their cells at nights? I suppose it is the price you pay if you are trying to do good journalism in Turkey.

I met Rasool during the siege of Kobani (Ayn-El-Arab). We were the part of the same crew working for an international news agency. We woke up early every morning stopped by the refugee camps as a first thing and got our dose of human suffering for the breakfast. Then, we brainstormed about the stories we can produce for our afternoon piece over the lunch which he was always quite picky about.

I remember talking about the region’s problems over a kebab we are eating. While zipping my creamy ayran (a drink made of yoghurt and water) his comment followed "anything human - either life or thought - is worthless around here, the ones hold the power are enslaved by it easily even though it costs human life".

Meanwhile, I wasn't able to understand what a 5 language speaker (Kurdish, Turkish, Arabic, Persian and Turkish) doing in this post-apocalyptic environment. He appeared to me as an individual who is looking for a ‘third pill’ (e.g.: Matrix)

Rasool hasn't encountered any problems although he was working in dangerous regions for journalists such as Iraqi Kurdistan, Rojava/Northern Syria for various media outlets until his last gig . He was the part of a Vice News Crew who was covering the conflict between outlawed Kurdistan Workers Party (PKK) and Turkish security forces in Turkish Kurdistan/Southeast Turkey/Northern Kurdistan. Hundreds of lives from all sides- civilians, soldiers and guerrillas- were lost to ongoing fighting. The crew was detained in front of their hotel on 27th of August in Diyarbakir, a city in southeast of Turkey, by The Counter Terrorism unit (TEM) and, last but not least, ridiculously charged with working for a terrorist organization.

The police busted the crew’s hotel rooms and confiscated their laptops, hard drives etc. They had important footage in their hard drives such as outlawed PKK’s youth with YDG-H patrolling streets with automatic rifles and 13 year-old girl who got caught a crossfire during the fighting between YDG-H and Turkish security forces.

They got arrested while they were doing their job and accused of “engaging in terrorist activities”. Apparently, Turkish authorities were determined to turn this to a Greek tragedy.

They were accused of being an ISIL agent. The ‘official' reason for the detainment was an  encryption program allegedly found in Rasool’s laptop what is thought to be used by ISIL members in addition to an anonymous phone call that claims spotting ‘spies’ in the neighborhood, received by the police.

That is the point it becomes an actual theater play by Turkish state. First rational question, how were they engaging in terrorist activities? Were they hanging out with rifles or setting up a bomb? The answer is a big NO. Second rational question; is an encryption software enough for declaring someone as an ISIL agent?

Well, if the answer is yes, some portion of Chinese citizens along with good sum of Americans are becoming automatically a member of ISIL which make them one of biggest the states in the world like they claim to be one (!). Third one; what is this popular encryption software used by ISIL? I don’t know the answer. I think Turkish authorities don’t know either.

So… What was this about? Why is the crew charged with terrorism even though a quick Google search can prove otherwise? Of course, it is a warning and an intimidation for the journalist who works for foreign media outlets. First of all, Turkey is trying to restrict the information that goes out of Turkey to the world. Second, while mainstream media becoming more and more useless in Turkey some Turkish citizens- esp. young generation- looking for alternative sources of information which is not ideologically polarized.

But what is the source of the problem? A dysfunctional, broken and flawed machine called Turkish ‘state’. Let’s take a look at one of the cogs of the machine, Turkish media…

While Vice News Crew was risking their lives in the conflict zone Turkish mainstream media was turning a blind eye to ongoing events in the region. By the way, it is not even a matter resources (money, staff, etc.) they have. Many news outlets have crews in the region and local journalists are doing a great job on the field.

Lack of coverage in Turkish mainstream media is  a ‘media elite’ problem. So-called journalists - mostly over 40 year old- who only gets paid to decide what is to be aired or not.  Even though I understand they are a generation who were went through military coups which are used as a justification for not doing journalism. It is just their lack of character and skill that prevents them from doing their job right. In addition to that, the media elite can’t comprehend the change happened in Turkey in last 20 years. I wouldn't expect less from a flawed machine.

It is almost 2016 and Turkey still has only one priority; protecting a body which is defined as ‘the state’ that far away from majority of its citizens and usually reshaped by the "ruling power", in this case, Justice and Development Party. I want to remind it was the military who had the ‘ruling power’ for a long time considering 4 coups in Turkish history. A government becoming the state itself is not new for Turkey. It is imprinted to its DNA that is hindering democracy from the very beginning (1876).

Today, Turkey’s democracy still doesn’t have check-balance mechanisms, transparency, political accountability, free press, functioning civil society in a world where democracy defined around those things. Finally, under AKP rule one the most important element of a democracy started to disappear in Turkey. The rule of law, always a problematic thing in Turkey but it was still considered and respected but many in Turkey as a last standing pillar - even though being damaged - that keeps the country standing.

Rasool’s case is one of the many examples from Turkey how even a standard journalism practice can be twisted around and considered as a terrorist act for the purpose of total domination in political sphere by using rule law as a tool. It is the end of the Turkish Republic as we know it as Umut Ozkirimli writes in his piece for Open Democracy.

So, what is Rasool doing right now? I don’t know. Event his lawyers don’t know. Two journalists from the Vice News crew released and deported after spending 4 days in high security prison where many ISIL and PKK militants being held. It has been 75 days today since he got arrested. Prosecutors has decided that investigation should be "confidential" so even lawyers couldn’t take a look at Rasool’s case, for which they had to prepare a defence for the next hearing that would decide if Rasool should be freed or not.

Story of Turkey; trying to walk when your hands are tied with a chance of either getting blown up by a bomb or being jailed.

Arrests are nothing unexpected
Ethical Journalism: The Gateway to Press Freedom and Democracy